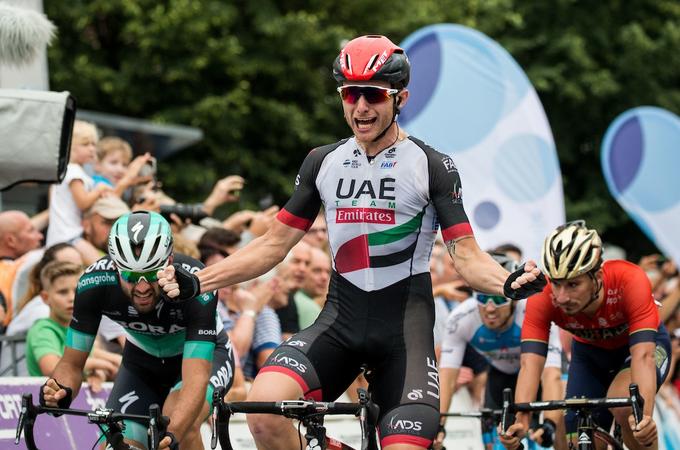 Finish: Last kilometer of the first stage was very intense – we saw two nasty crashes in the last kilometer. Three Italians were the strongest on the end, best Slovenian was Luka Mezgec. Sprinter Marcel Kittel and Mark Cavendish finished the day empty-handed.

Thursday stage will take cyclists from Maribor to Rogaška Slatina, it will be 152,7 kilometers long.

17:00, 5km to go: Cyclists are in the last lap. Best teams are preparing their trains. Who will be the fastest?

16:53, 10km to go: Cyclists are already in Murska Sobota, where we’ll see finish of today’s stage. They will now do two laps around the city, then we’ll get the stage winner.

16:50, 14km to go: Nik Čemažar is the last of the escapees that was caught, now the race starts from zero.

16:42, 20km to go: Breakaway group has been caught after a long escape. Teams with best sprinters will now fight for the best positions ahead of the finish in Murska Sobota.

16:40, 23km: Before we had to the finish area we have another intermediate finish in Beltinci. Escapees are now just half of minute ahead.

16:28, 30km: Cyclists are now riding on the wet road, but it seems that the finish will be dry. It seems that the thunders storm has passed Murska Sobota. Lead of the breakaway group is at 50 seconds.

16:15, 40km to go: Cyclists are getting closers and closer to the finish line in Murska Sobota. Australian Benjamin Hill (Aus, Ljubljana Gusto Xaurum) won the intermediate sprint in Ljutomer.

16:00, 50km to go: Cyclists have came to the feeding area in Vučja vas, they took some refreshments and energy food. Gap of the leaders is now at one minute and a half. 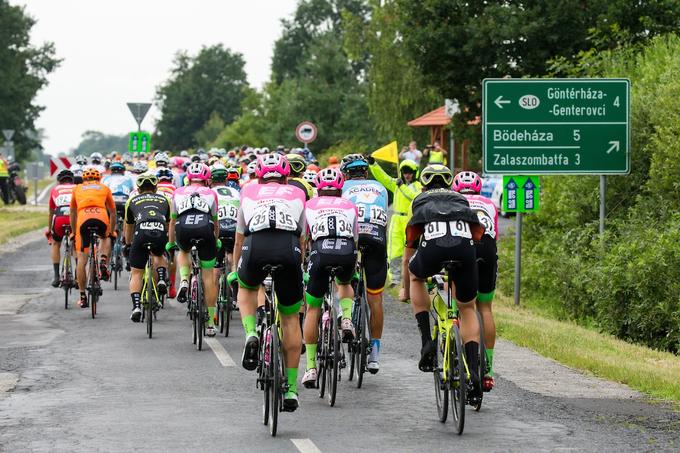 Jon Božič (Adria Mobil) won the unofficial intermediate sprint in Gornja Radgona. He’ll get award for it, but no points for the classification. 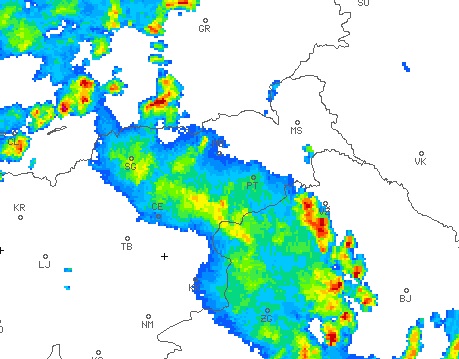 15:45, 63km to go: We didn’t had rain for the most of the stage, but it looks like that we’ll have some showers towards the end. Rain could spice up the sprint finish, and crashes are also possible. Lead of the escapees is now at one minute and 40 seconds.

15:40, 67km to go: Cyclists are closing in on Gornja Radgona. Lead of the breakaway group is at around two minutes.

15:35, 85 km: Strongest teams are again in the front row of the main group. They almost have to hold back a little bit, so that we still have an breakaway. There is no doubt that they will end the escape when the time comes. 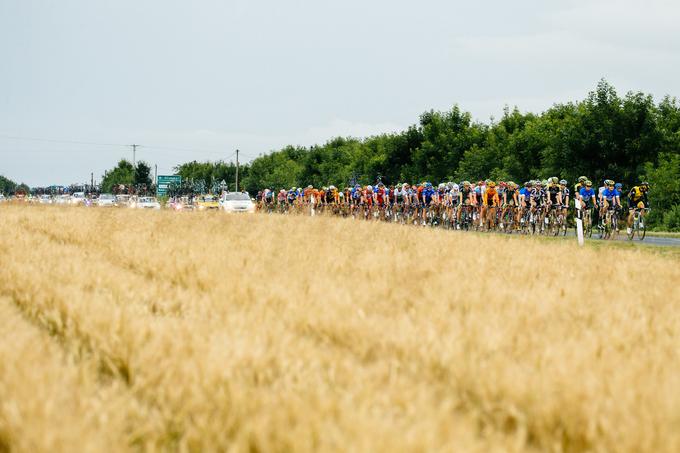 15:10, 66km: Teams with favorites for the sprint finish had again increased the pace and the gap between them and leaders has gone down. It’s now under two minutes (1:55).

15:05, 62 km: We’re already on 62ndkilometer. Gap between the leaders and the main group is at two and a half minutes. Main group is in the control of the race and doesn’t let the escapees too far away.

14:55, 56km: Australian Benjamin Hill was first on Goričko, and he’s the only one who got points since it’s 4thcategory climb. Lead of the five riders in the front – including two Slovenians (Čemažar & Božič) is just over two minutes. 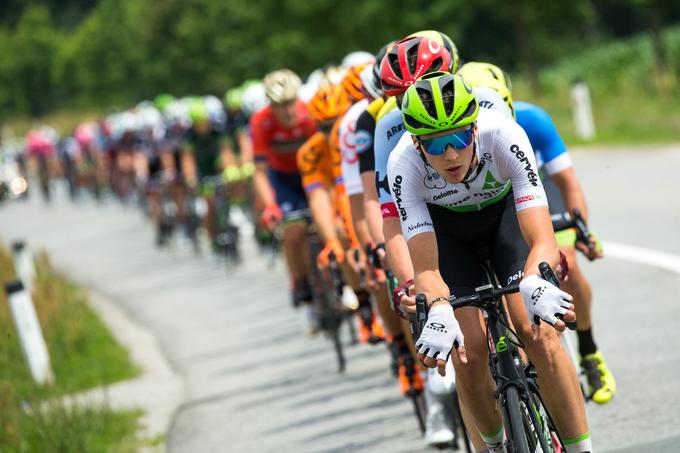 14:40, 48km: Leaders are about 2 and a half minutes ahead of the main bunch. Pace of the peloton has eased down a little bit, which is a good news for the escapees.

14:30, 43km: We’re close to the first mountain finish on the 2018 Tour of Slovenia. Climb will not be difficult, it is 4th category climb on Krajinski park Goričko. Lead of the escapees is at 2 minutes and 20 seconds.

14:15, 32 km: Gap of the leading cyclists has gone down to 3 min 15 sec, harsh pace in the front of the peloton is dictated by teams LottoNL-Jumbo, Mitchelton-Scott, Katusha Alpecin and Dimension Data.

14:13: Five riders in the lead have a nice advantage ahead of the main group – 3 minutes and 40 seconds.

14:05, 20km: Leading rider Čemažar and Hilll are just 20 seconds ahead of Slovenian-Slovakian trio, but four minutes ahead of the main group. So far we’re lucky with the weather, there were just couple of drops so far.

14:00, 18km: Leading cyclists are already three minutes ahead of the main group, three riders from the second escape are just 35 seconds behind the duo. We’ll have five riders in the escape very soon.

13:55: Escapees had increased their lead. Now we have three more riders that are following them: Jon Božič (Slo/Adria Mobil), Juraj Bellan and Martin Haring (both Slk/Dukla Banska Bystrica). 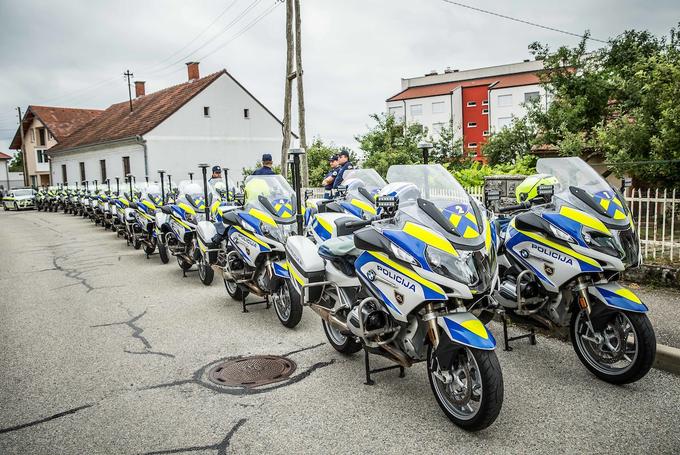 13:47, 10km: Five cyclists managed to pull away from the peloton, but they didn’t get far ahead and were soon caught. So still no changes after 10km, but attacks are happening all the time.

13:40, 3 km: Cyclists are pressing hard on their pedals, but for now we don’t have a successful breakaway.

13:38: We see many attempts of the breakaway on the way towards Hungary, later in the day we’ll also visit Austria

13:30: The race has started. We expect first breakaway soon, but on the end – if there are no surprises – a battle of the sprinters.

13:25: It has begun! 151 cyclists went on the course of 25thedition of Tour of Slovenia. They will start with the paced ride, the “real” start of the race will start in 5 minutes.

It will be hard for Slovenians to compete in such a strong competition, but home ground advantage and home fans can make a difference. Slovenian can easily be among the best.

Who is a favorite for the overall victory?

Thursday’s stage will be also suitable for sprinters, but not completely flat, however first real challenge comes on Friday with the finish on Celje castle. King mountains stage with finish in Kamnik will be on Saturday, Sunday is reserved for the time-trial from Trebnje to Novo mesto. After that the winner will be crowned.

Cycling fans will have a chance to see one of the best cyclists of the season in action – Primož Roglič will aim for his second overall victory on the Slovenian tour, that would make 12th victory for Slovenia on the home race.

Polish champion Rafal Majka, winner of 2017 Tour of Slovenia, and Colombian Rigoberto Uran, runner-up from 2017 Tour de France, will be most likely his biggest rivals.